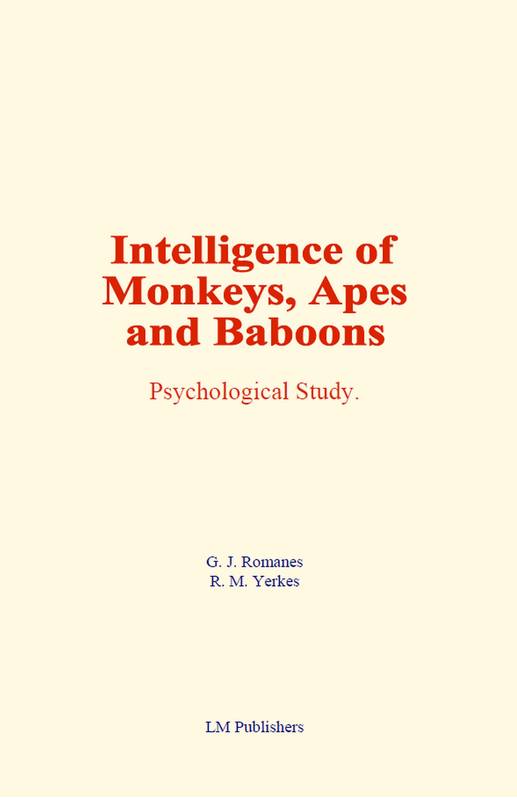 Intelligence of Monkeys, Apes and Baboons

Intelligence of Monkeys, Apes and Baboons

Although monkeys do not reach the human stage of a rich life of ideas, yet
they carry the animal method of learning by the selection of impulses and
association of them with different sense impressions, to a point beyond that
reached by any other of the lower animals. In this, too, they resemble man;
for he differs from the lower animals not only in the possession of a new sort
of intelligence but also in the tremendous extension of that sort which he has
in common with them...

The intelligence of apes, monkeys, and baboons, unfortunately, has not
presented material for nearly so many observations as that of other
intelligent mammals. Useless for all purposes of labour or art, mischievous as
domestic pets, and in all cases troublesome to keep, these animals have never
enjoyed the improving influences of hereditary domestication, while for the
same reasons observation of the intelligence of captured individuals has been
comparatively scant. Still more unfortunately, these remarks apply most of all
to the most man-like of the group, and the nearest existing prototypes of the
human race: our knowledge of the psychology of the anthropoid apes is less
than our knowledge of the psychology of any other animal. But notwithstanding
the scarcity of the material which I have to present, I think there is enough
to show that the mental life of the Simiadæ is of a distinctly different type
from any that we have hitherto considered, and that in their psychology, as in
their anatomy, these animals approach most nearly to Homo sapiens...
S'identifier pour envoyer des commentaires.