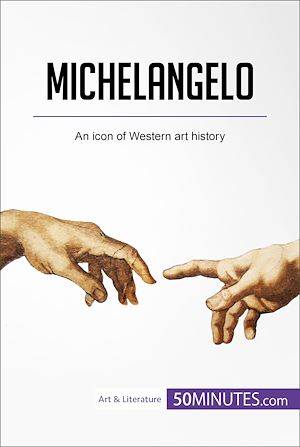 An icon of Western art history

Keen to learn but short on time? Find out everything you need to know about
the life and work of Michelangelo in just 50 minutes with this straightforward
and engaging guide!

Michelangelo is one of the most influential artists in Western art history,
and his works, including his famed sculpture David and the frescoes adorning
the ceiling of the Sistine Chapel, are among the most recognisable in the
world. As the creator of statues and paintings on a vast, imposing scale, who
displayed virtually unrivalled technical mastery and interwove religious and
secular subjects in a highly original manner, Michelangelo was a source of
inspiration to countless later artists, including the Mannerists and numerous
19th-century French artists. In spite of his exceptional talent, he was
frequently dissatisfied with his own work, and a number of projects were left
unfinished at his death.

In this book, you will learn about:
•The artistic developments that took place in Italy during the Renaissance
•The commissions Michelangelo received from influential patrons, including
several popes and the powerful Medici family
•His most celebrated works, including David and The Last Judgment, and their
influence on later artists

ABOUT 50MINUTES.COM | Art & Literature
The Art & Literature series from the 50Minutes collection aims to introduce
readers to the figures and movements that have shaped our culture over the
centuries. Our guides are written by experts in their field and each feature a
full biography, an introduction to the relevant social, political and
historical context, and a thorough discussion and analysis of the key works of
each artist, writer or movement, making them the ideal starting point for busy
readers looking for a quick way to broaden their cultural horizons.